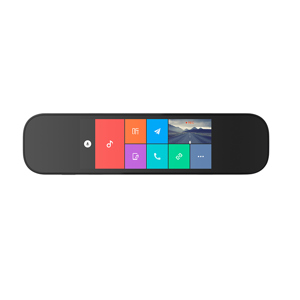 Smart mirror with a 6.86" IPS display, with a resolution of 1280 x 480p. Its camera sensor is the Sony IMX291, with a 470 mAh battery. It can also exercise multimedia functions. The device consists of a seemingly classic rearview mirror with a front-facing camera pointing towards the road once we have installed it.

The glass is constructed in such materials that it allows use both as a mirror and as a touchscreen. In mirror mode the time can be displayed, but not much more information. Having the mirror display continuously on could compromise the safety of those inside the vehicle during a journey. This display can be used paired with the rearview camera 70mai Car Backup Camera.

It can also be used independently as the vehicle's media center, compatible with software that is currently (October 2019) only in Chinese. Some of its functions are GPS or video and music playback. The latter can be carried out from a SD memory card that can be connected to the device.

Despite the inclusion of its battery, it can be permanently connected to car power with a car cigarette lighter to Micro USB cable that is included in the package. It incorporates a microphone that, in the future, could be compatible with smart assistants such as Alexa, Siri or Google Assistant. This microphone features dual noise cancellation, as well as echo cancellation.

On the other hand, taking advantage of the microphone, it includes the possibility of making calls, in addition to FM radio. It supports WiFi dual-band connection and 4G. Its front camera will be able to notify when it detects danger. Its dimensions are 303.8 x 75.8 x 15.6 mm