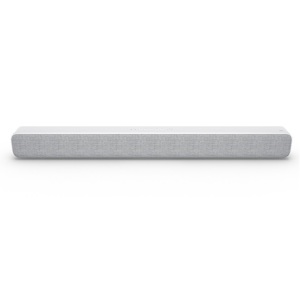 The television section could not escape Xiaomi, we are not talking about televisions as such, but about hearing aids that greatly improve the experience. The Xiaomi TV Soundbar is one of the best options in terms of soundbars to improve the sound and beautify our domestic space.

It was a bar designed for 33-inch televisions, in order to fit in with its width, but after several tests we have been able to verify that it combines perfectly with televisions of more than 50 inches, giving elegance and minimalism to the television environment.

At the top of the device, we have some physical buttons and LED lights for different notifications. First of all, we have two buttons that will allow you to raise and lower the volume, the rest of the buttons will be used to connect or disconnect the connections to which they refer (which we will deal with in the connectivity section), in addition, each of them has an Associated LED that will light up if the connection is active. It includes some screws and adapters in case we want to hang it on the wall, although it also has two legs at the base (very small) so it can rest on a table, or on the floor.

The vast majority of soundbars come in black, but Xiaomi adds elegance with a combination of gray and white with quality materials in a total of 1,925 kg of weight. In connectivity it does not fall short, on the back there are several connection positions: a 3.5 mm minijack, a SPDIF, two RCA, an optical audio button, and the power plug, in addition to locating the on/off button just beside. It has a power of 28 W and a frequency range that covers from 50 to 25000 Hz.

The Bluetooth connection with our Smartphone will allow us to control the volume and the connection to the television. In addition, the Xiaomi Mi TV Soundbar has a total of 8 sound units, incorporated to provide the user with a wonderful and immersive experience in movies and video games. It allows wireless connection with televisions, computers, or tablets that are compatible with this technology. This would save us having to run cables from one device to another. Its dimensions are 83 x 7.2 x 8.7 cm.

The soundbar is fully integrated, measuring 830 x 72 x 87 millimeters with almost two kilograms of weight. In this space, however, there is room for eight speakers, two clear and transparent tweeters for tweeters, two 2.5-inch woofers to ensure fullness in the mid and low frequencies, and four passive radiators that guarantee really full bass and allow an experience. unexpected, but definitely sonorous. In general, when you connect it to the TV, you will have a real change in the use of multimedia contents, especially when watching action movies, with sound effects that will be decidedly "pumped" and with a pleasant vibration that will appeal to those who love low frequencies. . The gaming experience is also satisfactory, which, unless you use a dedicated system, will be much more attractive. After using it for a couple of weeks - in which it has been difficult to return to the TV speaker - in most cases it offers a much flatter and sparser sound experience. Obviously, its main use is the connection to the TV, but nothing prevents you from using it with a smartphone thanks to Bluetooth, which guarantees good coverage and allows you to expand the possibilities of using this Xiaomi Mi TV speaker. Pairing is fast and stable, and the soundbar remembers the last connected device, without requiring anything special to work.

The reason I wanted to update my TV series was because it was impossible for me to have a good watching experience. I could never hear what people are saying, I turned the volume up and BAM! Super loud any sound, it is somewhat annoying. Thanks to Xiaomi and the relatively good price, with the soundbar I can even hear the sounds. Note: with Bluetooth you don't have any volume problems. I wanted to point out the fact.

I needed a white soundbar with no subwoofer as there is no space and it was perfect for a good price. I didn't need HDMI and I connected to the TV via a jack cable and everything works fine. Bluetooth also works with various phones and no problem. Of course, you can't expect superior sound quality, but it's fine for me to enjoy movies and videos. The bass effect is best when it's centered on the soundbar (it has some special bass waves or something) and it can be quite loud when needed, but we didn't use more than 50% of the volume level. Really a good combination for dancing is Spotify plus this bar :) I've become a fan of Xiaomi lately, and I can definitely recommend the TV bar for TV or music. For the price, it is a no brainer.

Excellent soundbar compared to the price and also the sound and good quality. The materials and design are impeccable, as is the Xiaomi tradition. The port mapping is adequate, Bluetooth is always convenient and in this case I found it very fast and stable. The only flaw in this beautiful soundbar is the lack of a remote control, but by connecting it to the headphone output the TV can control the volume with the remote control.

This product costs 60 euros and it has almost nothing to envy its more expensive competitors.