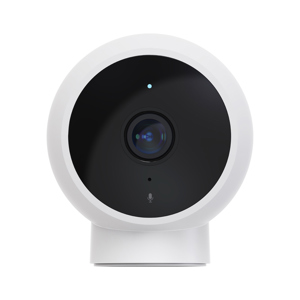 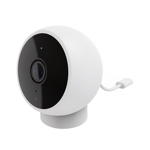 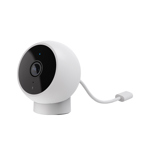 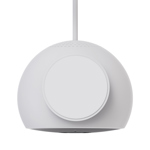 An improved version of the Mi Home Security Basic (equivalent model to the Yi Home Camera).

It significantly increases the viewing angle from 130° to 170°.

Another new feature is its communication system, which continues to be directional, but now does so more smoothly, as if it were a phone call and not a walkie-talkie mode as in previous models.

Add the AI-enhanced detection, thus avoiding false alarms and only send the warning when it detects human movement. This feature does not mean that the camera does not record all movements, but only affects the notifications received, reducing them considerably if we have them activated.

Captures images in 1080P FHD, with a frame rate of a maximum of 20fps.

Of course, it has 940nm infrared night vision.

As for its design, we see a spherical style, with which thanks to its magnetic support, we can place the camera in any direction with absolute freedom of movement. This support, in turn, can be placed on any surface, as it has a magnetic base and adhesive.

Needless to say that it is linkable with the app Mi Home.

How long is the charging cable?

Do you know if new upgrades will be released for the camera? I bought this camera and it worked well, a firmware upgrade appeared and since that day the camera does not record in the SD, and to view the image live, sometimes it lets you see it and sometimes it doesn't. The firmware that gives problems is 4.0.9_0111, do you know if it is possible to revert to the old firmware?

Yes, you can downgrade or wait for a new upgrade to come out.

It is not recognized by the Mi Home app on my mobile (version 5.8.2 and says that there are no updates available) and it does not appear in the list of cameras.

This camera model is only available in its Chinese version at the moment, so in the Mi Home app you will have to put the location in China to be recognized. The language will remain as you have it, do not be afraid. The only thing is that if you have other gadgets linked to Mi Home, they may stop working.

Does the camera loop to the SD card? That is to say, when the SD is full it re-records on top. Or does it stop recording when the memory card becomes full?

I can't tell you about this particular camera, but about others. The ones I know record until the card is full. You can remove it and connect it to a PC to empty it without problems, or you can download the content on your mobile or on a hard drive that you have connected to the router (for example). Once emptied, it is formatted without any problem. You can also delete content that does not interest you yourself from the phone, in this way you can increase the time it takes to fill up. As I say, I am talking about other cameras, but I suspect that this will work the same. One thing to keep in mind about this camera is that at the moment there is only a Chinese version, so to connect it to My Home it will have to be located in China for the app to detect and link it.